Creating The Weird And Wonderful World Of Good Omens

For a long time, Good Omens felt like one of those ill-fated almost adaptions destined to gather dust in a cupboard somewhere. First published in the 90s, the cult fantasy novel by the late Terry Pratchett and Neil Gaiman – which follows the unlikely friendship of an angel called Aziraphale and a demon called Crowley, who team up to stop the approaching Armageddon – came close to being turned into a film on several occasions.

In 2002, Terry Gilliam was said to be make a film starring Johnny Depp as Crowley and Robin Williams as Aziraphale. “But it was post-9/11,” Gaiman said in a recent interview with The New York Times. “No one was interested in an apocalyptic comedy.”

Four years after Pratchett’s death, Good Omens has finally found a spiritual on-screen home in the form of a six-part adaption written by Gaiman himself, directed by Douglas Mackinnon, and co-produced by Amazon Studios and BBC Studios. The series is worth watching for its brilliant casting alone; David Tennant and Michael Sheen star as the shambolic Crowley and Aziraphale respectively, while there are cameos from Frances McDormand as the voice of God and Jon Hamm, who plays a suited and booted Angel Gabriel.

In tribute to Pratchett’s writing, Good Omens sticks religiously to the plotline of the original book. As well as striking up an unlikely friendship with one another, Aziraphale and Crowley have both grown surprisingly fond of life on earth in the 6,000 years since Crowley tempted Eve to eat the apple in the Garden of Eden. Confronted with the news that the impending apocalypse will be brought about by the Antichrist (in the form of an 11-year-old boy), they decide to join forces.

As Crowley and Aziraphale’s efforts to save the world unfold, what follows is a delightfully OTT, bordering on kitsch visual feast filled with extravagant costumes, pyrotechnics and – of course – visual effects. London-based VFX studio Milk, led by co-founder Jean-Claude Deguara, is the team behind the effects, and was brought on board having previously worked with Mackinnon on BBC’s Sherlock.

What particularly appealed to Deguara about working on the series was the unusual opportunity to create ‘funny’ visual effects – not something you’d typically see in your average Marvel blockbuster. “It’s not often you get to create VFX in a comedy context,” he says. “I really enjoyed the comedy of the hellhound sequence [for example], where you go from a big, powerful and menacing hellhound conjured up by Beelzebub, and you end up with a cute little pup in its place when the Antichrist (11-year-old Adam) imagines the kind of dog he’d really like to own! We had to get the hound just right to fit the tone, not too silly and just grounded enough in reality. It’s all about supporting the story – and bringing the comedy elements to life.” 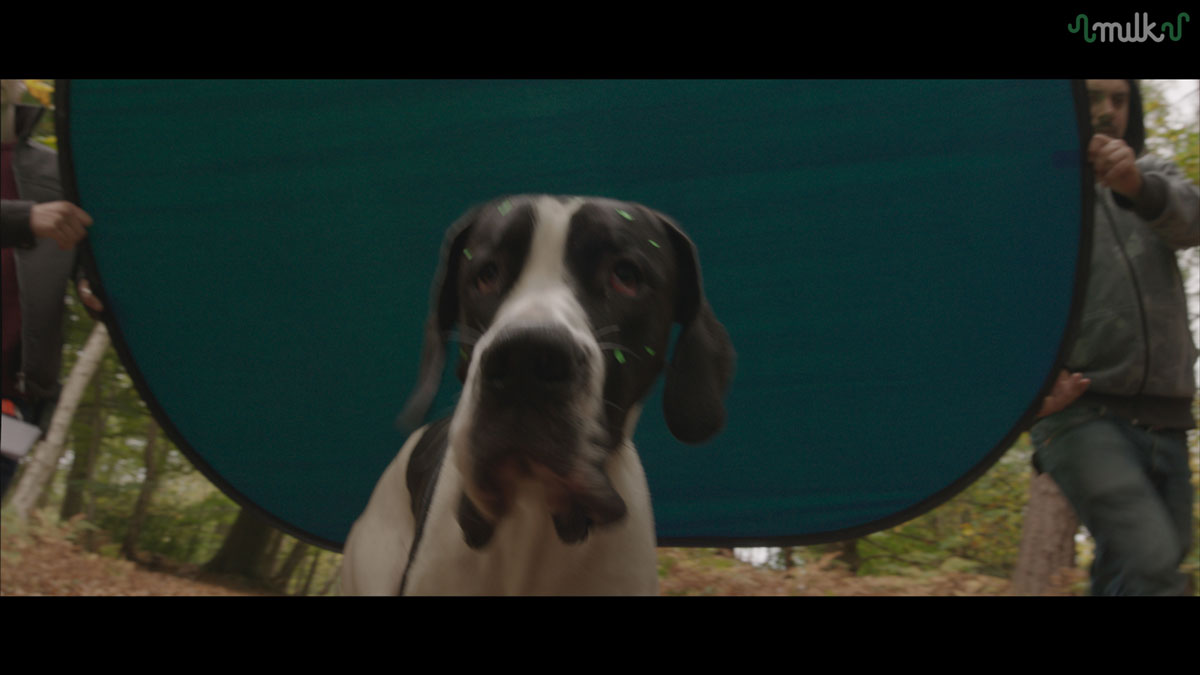 The scale of the task that Deguara and his crew of 60 were faced with was huge. They ended up creating 650 visual effects ranging from a call centre filled with maggots to a sequence in which Crowley travels through the internet at high speed, all during the course of a five month post-production period. This meant that the pre-production stage of the process was vital, and Deguara worked closely with Mackinnon and Gaiman on translating what the script would look like on screen, and planning out what was workable and what wasn’t.

“Having constant access to Neil as the author and showrunner was brilliant as we could ask for clarification and more details from him directly when creating the VFX, and receive immediate creative feedback. He would often quote directly from the book to guide us creatively. You don’t often get that level of detail when you’re developing the VFX,” says Deguara.

When it came to shooting the series things also turned out to be very fast-paced, with multiple locations in the UK shot over roughly six months, followed by three months in South Africa. Deguara worked closely with the production design team, who had to build sets for everything from the Garden of Eden through to Ancient Rome. The team was headed up by production designer Michael Ralph, who says him and Deguara were “joined at the hip from the beginning”.

Spending much of his time on set meant Deguara could ensure that the visual effects team’s role in the production played out as smoothly as possible. “Being on set allowed me to help solve various problems as we went along. I could also show Neil and Douglas various concepts that were being developed back in the studio, so that we could move forward more quickly with creative development of the key sequences, particularly the challenging ones,” he adds.

Some of the trickiest scenes to pull off were the ones featuring Crowley’s Bentley, which is often seen tearing around various locations in London and the countryside. The production team managed to locate a real Derby Bentley from 1934, which the visual effects team then photo-scanned and modelled in intricate detail to create a CG version. “Ultimately, Crowley drives through hell fire on the M25, it catches fire, and burns continuously as he heads towards the site of Armageddon,” says Deguara.

Recreating Soho’s Berwick Street, where Aziraphale’s three-storey bookshop is located, was another particularly challenging feat. Surprisingly, not a single scene was actually shot in Soho, according to Ralph. Instead, the production team ended up creating a physical set where all of the relevant scenes were filmed on the tarmac of an old World War Two airport, while visual effects were used to extend the street into the distance and to drop extra cars and people into each of the scenes.

While some of the effects seen in the series are more fantastical than others, Milk’s biggest challenge was to help maintain the illusion for viewers that the story is taking place in real life. The key locations of Heaven and Hell, for instance, are based out of an office block. Fittingly, hell is located in the basement (although it was actually shot in a disused abattoir in South Africa) while Heaven is in the penthouse suite, and comes complete with CG panoramic views of landmarks including the Shard and the Pyramids.

“Despite the fantasy nature of the subject matter it was important that the CG elements did not stand out too much,” says Deguara. “VFX should always support, enhance and help tell the story, it should never take over…. It was key to make sure all the effects felt very grounded in reality while still having a fantastical, apocalyptic Good Omens feel, to support the story and Neil’s vision.” 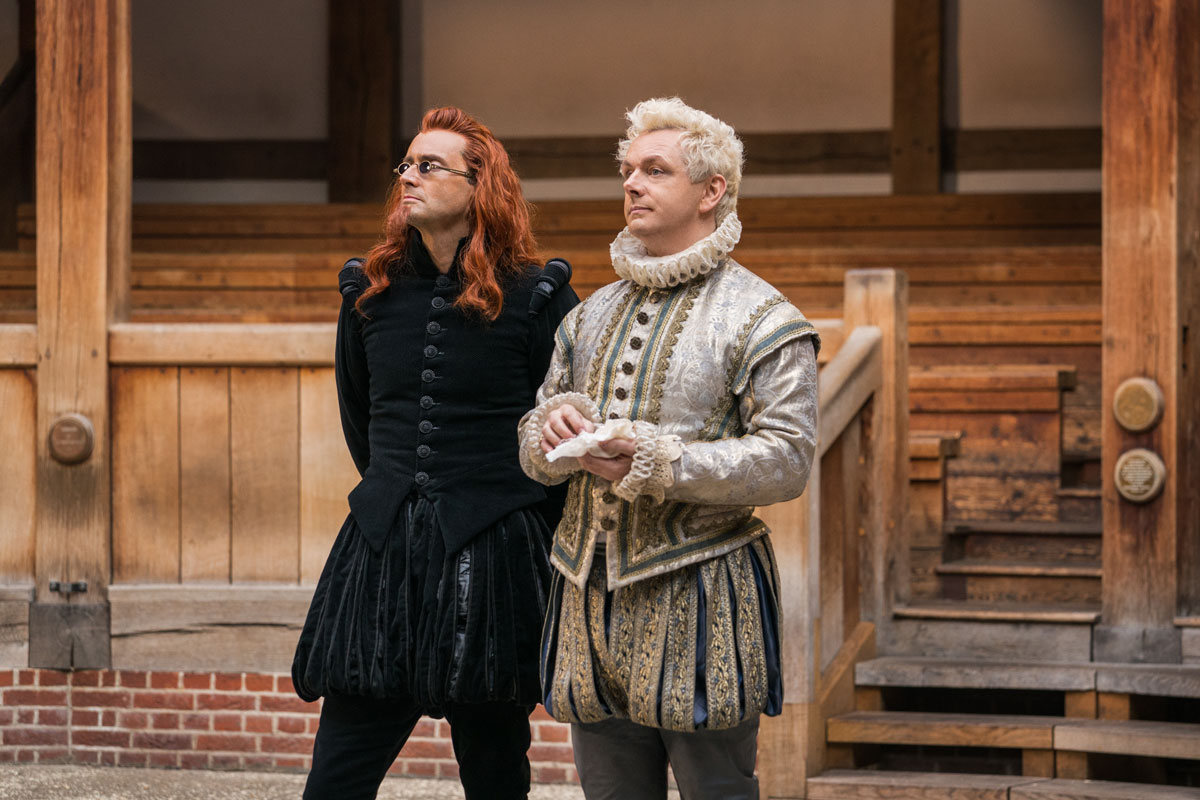 Good Omens is available to watch now on Amazon Prime, and will be shown later this year on BBC2; milk-vfx.com